Ruth, Marlene and Steve know from talking to people in the last few weeks, that a lot of Sutton North residents have not yet made up their minds about the EU referendum on 23 June. 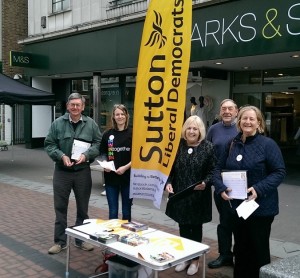 Ruth says:  ‘We are in no doubt.  Britain is better off in:  we simply would not have influence in the world without our EU partners.  No-one says its perfect, but its better than going it alone.’
Marlene adds:  ‘Jobs are more secure with Britain being part of the biggest trading market in the world, and those who want us out have not been clear what the new arrangements would be.  This uncertainty worries me.’
Steve has concerns: ‘I dont see any major international figure, or persons of authority (except Russia), arguing for Britain coming out.  Boris and Farage make an unlikely pair, whose views I would not trust.’
The three ward councillors were out in the High St on Saturday talking to shoppers.  If you would like more information or to help the ‘Stronger In’ campaign visit this web site:
http://www.strongerin.co.uk/#PG0g6k3Iy3zmhCyP.97
Leave a comment