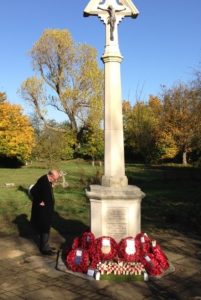 Sutton residents are being invited to commemorate Remembrance Day in the borough.

Sutton Council’s official Civic Act of Remembrance for Armistice Day marking the end of the First World War will take place in Trinity Square on Sutton High Street on Friday 11 November. The ceremony will begin at 10.30am with the Mayor of Sutton Cllr Richard Clifton, the Mayoress and the Deputy Mayors, Cllr Steve Cook and Cllr Nali Patel, in attendance. Members of the public are invited to attend and join in the observance of the two-minute silence starting at 11am.

“Armistice Day is a chance for us to pause and remember all of those who made sacrifices serving their country.

“A century ago young men and women of this borough were prepared to give up their lives for freedom and we must never forget their courage. I invite everyone who can to join us on Friday and honour the sacrifice made by these brave servicemen and women on our behalf.”

The Day of Remembrance is held nationally each year on the nearest Sunday to 11 November. This year Remembrance Day Services will be held throughout the borough on Sunday 13 November, with the main Civic Service being held at Holy Trinity Church, Maldon Road, Wallington. The service to remember those who gave their lives for us in serving our country starts at 10.30am, with the Mayor and Mayoress both in attendance, as will members of the Royal British Legion and the Boys Brigade.

There will also be a service of remembrance by the War Memorial in Manor Park,Sutton. The 10.30am service to formally pay tribute to all those who have given their lives in the service of this country will be conducted by the Rev. Justine Middlemiss, Rector of St Nicholas Church in Sutton.

Members of the Royal British Legion, the Scouts, Guides, Beavers, Sutton Police Cadets and the Boys Brigade will be present, and Sutton Music Service is sending a young trumpeter to play ‘The Last Post’.

Wreaths will be laid at the War Memorial by the Manor Park Friends Group, Sutton Local Committee and the Sutton & Cheam Rotary Club.

Ruth Dombey and Steve Penneck will be at the Wallington Remembrance Day Service while Marlene Heron, as Chair of Sutton Local Committee, will be at Manor Park, Sutton.