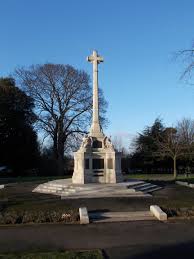 The War Memorial is listed at Grade II on account of its historic and architectural interest.  It is a most striking design with an impressive composition of fine carved angels and other carved decorative detail.  The design includes an elegant stepped base surround with four sets of two stone steps which facilitate access

Four acres of land were bought by the War Memorial Committee of Sutton Urban District Council and two houses demolished along the Carshalton Road frontage to make Memorial Gardens which adjoined Manor Park. The pathway in Carshalton Road was widened and new park fencing erected so that the memorial would stand in seven acres of garden providing a picturesque resting place, cool and shady, for every resident (according to the Sutton Advertiser).

On 7 January 1921 Sir Ralph Forster offered the memorial and grounds in trust to the Council to undertake and care for the memorial and the land. Forster of The Grange in Sutton and High Sheriff of Surrey from 1906, was a great benefactor and gave land and money for a hospital as well as raising funds for the memorial.  Further details of the listing are here:https://historicengland.org.uk/listing/the-list/list-entry/1440302