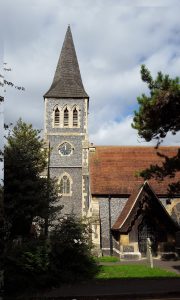 One of the first results of the setting up of a heritage Action Zone for Sutton town centre has been the upgrading of St Nicholas Church to grade 2* Listed status.
This means that the church is now considered one of the borough’s premier heritage buildings. There is only one Grade 1 Listed Building (the Great Hall at Carew Manor) and there were only seven Grade 2* buildings in the borough before the church’s upgrading.
The church was built by Edwin Nash in 1862-64 in Gothic style.  The upgrading was partly gained as the church has not undergone any significant alterations since them, retaining its stone font, wooden pews, choir stalls etc from that time.  Also the Victorian church, which replaced an earlier church on the site, incorporated 17th century memorials from that church, including the Baroque marble Brownlowe monument and these have been preserved. St Nicholas is considered one of Edwin Nash’s best churches for design.
Take the chance to have a wander round next time you are in the town centre.
Leave a comment