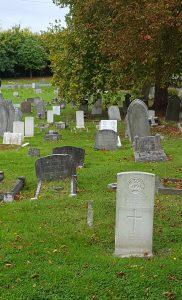 In October and November there will be a limited series of fascinating cemetery walks highlighting the varied stories of Soldiers who fought in World War 1 and who are buried in two of the Sutton Borough cemeteries. The walks will include the stories of others who served the Borough and war effort.

These walks have been organised as a part of the project called Sutton Living Memory which commemorates the 100th anniversary of WW1 and has received funds from the Heritage Lottery Fund and is supported by the Commonwealth War Graves Commission.
The walks are free and will last just over an hour and the dates have been deliberately chosen to offer the widest possible opportunity for those who live across the borough.
The details are as follows:
Sutton Cemetery Walks: Tuesday 14th November and Saturday 18th November
Bandon Hill Cemetery Walks: Saturday 21st October and Wednesday 25th October
To book tickets go to:
Sutton Cemetery
Bandon Hill Cemetery
All the walks, which will be led by Chas Bailey, Blue Badge Tourist Guide, will start at 2.00pm and will last about 75 minutes.
The meeting point will be outside the Chapel of Rest in each cemetery. Only assistance dogs are allowed and as we will be walking between graves it is not suitable for wheelchair users.
“We are only able to accommodate 20 people on these walks and so urge people to book their places as soon as they are able,” said Lord Graham Tope who chairs the group that is co-ordinating and highlighting all of the events which are taking place in the borough to commemorate the First World War which take place in the London Borough of Sutton
Leave a comment