New planning application for flats on the Prince Regent site 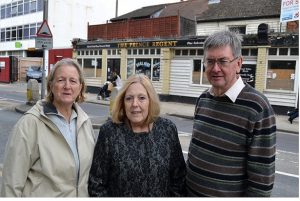 A new planning application (No: B2017/78658) has been received by the Council to redevelop on the Prince Regent site, opposite Sutton Green.  The proposal is for the demolition of the existing former public house at 342-346 High Street and erection of a six storey (plus basement) building to provide 154 square metres of flexible A1/A2/A3 floor space at ground floor and 30 residential units (comprising thirteen 1-bedroomed, fourteen 2-bedroomed and three 1-bedroomed self contained flats) on the upper floors.  The proposal includes the extension of the retail floor area within 342-340 High Street, resulting in loss of parking at 324-340 (the former Burger King site, now Sovereign apartments) and combined provision of 65 car parking spaces for both sites, cycle and refuse storage and alteration to vehicular access.

The application can be viewed on the Council web site here.

Although Historic England removed the Prince Regent from the national list of listed buildings, Sutton Council added it to its own local list last year.  See here.  An application to build a six to eight storey block of flats on the site was rejected by the Council a year ago.

Ward councillors have de-delegated the application so that local residents can have their say and their views can be taken into consideration. This means it will have to be decided by the Planning Committee rather than by officers.  We will delegate this decision back to officers if they indicate that they would  recommend the application is rejected.

Leave a Reply to Christine Pratt