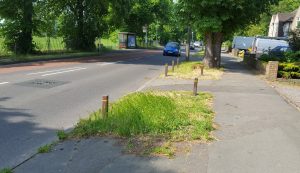 Following concerns raised by your councillors, Sutton Council officers met with the Regional Managing Director from idverde, the Council’s contractor, in early May to discuss grass verges.   idverde explained that there have been challenges with the weather which prevented them from carrying out all the scheduled cuts to the verges (and some Parks).  idverde were not able to commence cutting as early in the year as planned. Freezing conditions and snow in March followed by a very wet April delayed the schedule, by the middle of May only one cut (instead of three) had been possible.

The quality of the first cut was patchy, but this will improve with further cutting.  Over the last few weeks, IDV have committed additional crews. This has already shown a real impact in some areas, and will be monitored.

The contract specification with idverde states the grass should be cut twice during the months of April, May and June, and for the grass to be below 70mm in height in all other months. They are not required in the contract to pick up the grass after they cut it, as in normal circumstances it is actually beneficial if the grass that is cut remains on the verges. The problem is that when the length of the grass is too long, as has been the case recently, it becomes an issue when it’s not picked up.  As we discuss plans for next year we will look to see if we can require IDV to pick up the grass when there are long gaps between each time the grass is cut.

Grass cutting for the verges on ‘red routes’, that is the main A roads, such as Sutton By Pass,  Cheam Road  and London Road (A24), is the responsibility of TfL, not Sutton Council.  They are even further behind on this than the Council.   Sutton Council has been pressing them to catch up.  Sutton By Pass is now scheduled to be cut in July, with grass cuttings being removed from the first cut, given their length.